As a jobless breadwinner of a big family Hubert Waltermann, the father of the today’s seniormanager, plucked up courage in 1934 to go into self-employment to improve the situation for his family. Totally penniless he started production of pipe hooks in an extension, which served as a stable. The punched blanks were manually forged flat and bent on an anvil. These pipe hooks served to attach pipes laid on walls.

Some years later an empty factory building was rented and an investment was made in used machines. These first machines were driven by waterpower, in the following years the power was changed to engine force. The production was extended with the introduction of pipe clamps and heating brackets and later by pressed and bent parts according to customer samples or drawings.

In the same year the assembly of wire rope clips started. This was the birth of today’s current product range. For the new products new customers had to be gained. Very soon these customers were asking for other wire rope accessory products like thimbles, turnbuckles, shackles, etc. In order to meet customer demands these products were purchased from outside sources.

In the early 1960s the production of thimbles started in the existing hall.

The production range needed to be extended further. To be on our own feet and not to be dependent on suppliers / competitors the wish was to replace the bought forged products like shackles, turnbuckles and hooks by our own production. This turned out much more difficult than first imagined. First of all the experience was missing in the field of manufacturing, production and maintenance for the necessary dies and finally skilled workers needed to be found.

Despite all risks at the beginning of the 60s an additional hall of 140 m² was built. In there was placed the first belt driven hammer on which the production of the first forged parts began. The programme was continuously enlarged and the forging capacity was expanded by the purchase of two further belt driven hammers and the extended building was enlarged from140 to 380 m².

The development of our SIKA hook in the early 70s, produced of material grade 50, was a technical achievement. It had a substantially bigger opening and eye width as the known snap hook and was much lighter. The outstanding feature of this hook was the bead of the deflector at the turning point of the latch and the beak at the tip of the hook. This revolutionary design enabled the company to gain protection rights for this hook. The SIKA hook quickly developed to be a favourite component in combination with wire ropes and is still widely used in the industry.

Over the course of time wire rope slings have gained a competitor in chain slings. For chain slings and accessories material grade 80 was required. Based on the well-known and proven SIKA hook the SIKA clevis hook type GHS of material grade 80 was developed and produced. For the production of this hook the Berufsgenossenschaft awarded the “H97” manufacturers identification mark in 1980. Under this manufacturer sign the grade 80 chain system has been continuously extended. Today our SIKA chain system is a significant part of the company’s turnover.

Over the decades, and parallel to our own production, merchandise has been added to the wire rope accessory programme in order to present to the customer an extensive and rounded product range. The product range is constantly extended according to the requirements of the market. Due to price pressure and competition from importers, products like wire rope clips, turnbuckles and shackles could no longer be self-manufactured economically. Therefore, in order to compete in the market place the company set about finding suppliers who could offer competitive prices but at the same time could offer the quality products the company demanded. To ensure this, regular visits and inspections of the factories are made and all incoming consignments are checked by our quality department (visual check, pull tests, functional checks, etc.) before any product being placed into our extensive stock.

In addition to our wire rope accessories and SIKA chain system in 1994 the development of the ASS Stainless Steel System for architectural use started. Over the years this system has been continuously developed and extended in our company and has resulted in the vast range of products offered today.

Our emphasis on quality was recognized during 1995 when we were successful in obtaining certification acc. to ISO 9001.

In the past years, we have invested heavily in new machines with the latest technology and robots have been integrated into the production line in order to optimise production.

Later further investment has been made in tool making enabling all necessary dies, processing tools and appliances to be manufactured in our company. CAD processing and CNC controlled machines allow us to further develop and optimise production of our product range.

In the third quarter of 2008 an additional complete forging hammer line with a hydraulic upper pressure hammer with 63 kJ beat energy (= energy which will be released by a fall of a weight of 6,3t from a height of 1m) will be installed, along with robots for the loading of the hammer and furnace. This capacity extension is urgent to enable us to maintain our short delivery time on orders our customer have grown to expect.

This additional capacity will also enable us to manufacture chain products in grade 100 alongside the existing grade 80 SIKA chain system. Preparation for the production of the new products has already started within the company.

Over the years the buildings have had to grow to accommodate the production and programme extension. To make this possible a neighbouring property was purchased. In 1979 a bordering closed quarry was also purchased. After long and difficult work in 1981 a new warehouse of 2.100 m² was built to store the finished products stock and the dispatch department. A connection to the production area from this new warehouse was made via a roofed walkway across the previously purchased area.

In 1994 the old building was demolished and a new hall was built between the production halls and the dispatch department and thereby a connection was created between the separated halls.

Today our company is working worldwide. We export our products to all continents and we have a happy and trustful cooperation with all our partners both here and abroad. In 1982 a subsidiary in France was founded which is working successfully today. 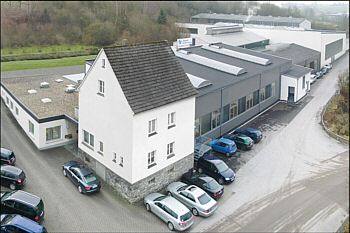 A view of the pictures shows how our company has developed over the decades. Step by step the production facilities and the product range has been extended. The topographical circumstance of the property has also contributed and prevented us from building one single optimal structured production hall. The company lives and grows.

The management of company is now in the hands of the third generation of the Waltermann family.

We hope that we have given a little insight into the history of our company.
We look forward to our continued cooperation to the benefit of both ourselves and our businesspartners. 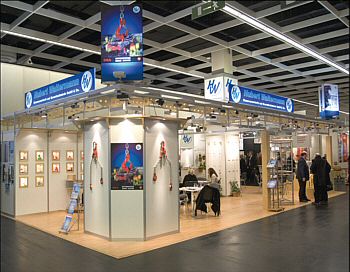